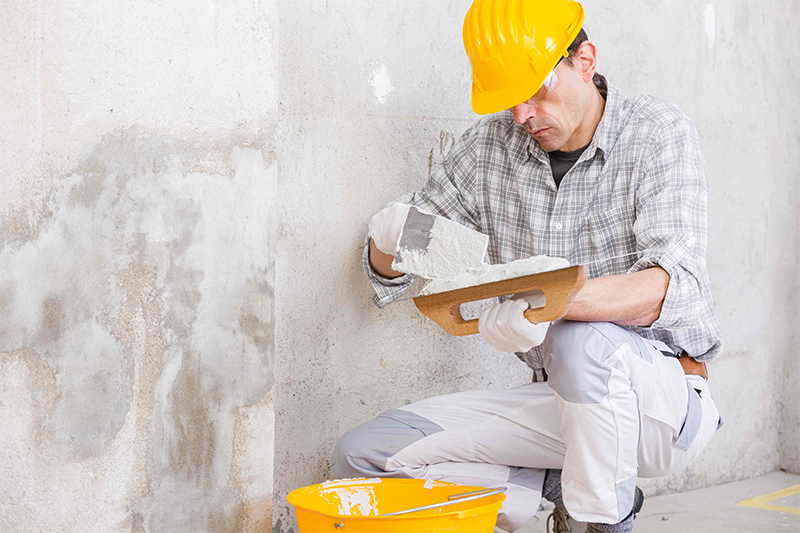 But, if you spot some damp in a property you are buying, don’t panic. Damp is not always as scary as it may seem and sometimes the cure can be surprisingly straightforward. And, with a little knowledge, you should be able to identify and fix some of the more obvious causes.

The main types of damp include:

Condensation: This is one of the most prevalent types and is often caused by poor ventilation, especially in bathrooms and kitchens. The symptoms are easy to spot – there are normally visible droplets of water on the affected areas and it often produces black patches of mildew, which can have an unpleasant musty smell. It tends to be worse in cold weather. Fortunately, there are a number of relatively simple cures. The key is to ensure you have good ventilation, which you can improve by installing an extractor fan, or, in extreme cases, a dehumidifier. However, the simplest thing of all is to open a window, especially when showering or drying clothes, using a bottled gas heater or boiling water. Lots of people worry about the heating bill, but, interestingly, it is cheaper to heat cool, dry air than warm, moist air. Condensation usually occurs on colder surfaces, so if they are warmed up in some way, the problem can be eliminated. There are some very good mould sprays that will treat any remaining mildew, but beware, don’t brush it away, as it will simply release more spores into the air and those spores are not good for your health. Finally, tumble dryers can be serious sources of condensation, so you should ensure they are either vented externally or you should buy a condenser type dryer, which will collect any wastewater.

Rising damp: Rising damp is caused by water rising from the ground and up into the house and so will only affect ground floor rooms and basements. You will normally see a ‘tide’ mark at the top of skirting boards, which can then travel up the wall for about one or two feet (depending on the ground level outside). It is not only unsightly, it can also damage plaster, which can crumble, and rot wooden joists where they meet the wall. It does not, however, generally produce mildew, as the salts picked up by the water on its journey prevent its growth. Rising damp is caused either by damage to a damp proof course (DPC) or by ground levels being raised above the DPC (which is normally around 15cm above ground level) on the exterior of a building.

It is a fairly controversial area, especially for older buildings. Many built prior to 1875 had no DPC at all, relying on the building ‘breathing’ to remove the damp rather than trying to prevent water penetration. If you then inject modern damp blocking chemicals into their walls, which is the standard solution, it can sometimes do more harm than good, as it will trap water rather than letting it evaporate naturally. The best advice is, before you do anything, take a look outside to see if, over the years, the land has been built up against the wall, as this is by far the most frequent cause. Typically this could be a raised flowerbed or patio, and, if so, all you need do is reduce it to its old level.

Penetrating damp: This is the kind of damp that comes through external walls. There can be lots of causes, but blocked and broken guttering is a regular suspect, as are leaky roofs (especially flat ones), chimney breasts and defective or worn pointing (the cement joints between bricks). Penetrating damp often becomes more obvious after heavy rainfall, causing a damp patch on the walls that can feel wet to the touch for some time afterwards. Like rising damp, as a result of salt in the water, it is not usually accompanied by mildew. The cures vary, depending on the cause but clearing the guttering should be the obvious starting point and if you need to do some localised repointing or replace a broken or missing tile or two, it shouldn’t prove too expensive. On the other hand, a flat roof will only last between 10-20 years, and once it has passed its sell by date, it will need redoing, which can be expensive.

Plumbing leaks: Leaks from pipes in kitchens and bathrooms are all too common. Unlike penetrating damp, damp patches will appear regardless of the weather conditions outside and will have a tendency to keep on growing. Common areas of concern are seals around baths, sinks and showers, as well as joints in the pipework. A quick examination, particularly under baths and sinks, should tell you where it’s coming from and you can always call a plumber if you’re not sure.

If you do have to call in the experts, consumer champion Which has done some research in the area and, unfortunately, the results were not very encouraging. In one case nearly 50% of the firms recommended unnecessary treatments and in another scenario, only 20% came up with the right solution to a complex problem. As a result, Which advises you get at least 3 quotes, that you compare the advice given and that you make sure the work is guaranteed. Better still, you can commission a report from an independent expert who has no vested interest in the resulting work, although it will add to the overall cost. There is a trade body – Property Care Association (PCA), some of whose members were involved in Which's test.

Our next auction is on Wednesday, 27th October 2021 and will be a HYBRID style auction with a maximum of 40 individuals able to attend.  You will however still need to complete our REMOTE BIDDING FORM