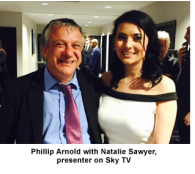 Our very own Auctioneer, Phillip Arnold, was asked to be Master of Ceremonies as well as Auctioneer at the special "Player of the Season Awards Dinner" for Brentford FC on Sunday 3rd May held at the London Hilton, Syon Park.

It turned out to be a very special evening as the Bees found out that weekend that they were to be in the play-offs to move up into the Premiership.

Phil had the glamorous Natalie Sawyer as co-host who was tasked with presenting the awards for the Brentford players. There was a small auction during the evening with some interesting lots including 4 tickets to The Who and a box at Wembley for the NFL, raising around £5,000 for their community charity.