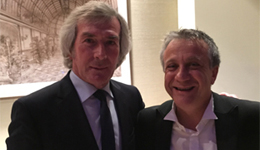 A star-studded night took place on 20th November 2014 in the beautiful setting of the Hurlingham Club in Putney to celebrate the 125th Anniversary of Brentford FC. The event was attended by 600 people, all in elegant evening wear to raise money for the Brentford Community Trust, who provide amazing support and opportunities for disadvantaged people across the Boroughs of Ealing and Hounslow.

Natalie Sawyer from Sky Sports compered the evening and there were key speeches from Cliff Crown, Chairman of Brentford and Greg Dyke, Chairman of the FA, along with TV personality Bradley Walsh who used to play for the Brentford reserves. Roy Hodgson and Pat Jennings were also part of the glittery sporting night.

Our turn came to shine when 8 lots of various sporting memorabilia were auctioned and Phillip Arnold took the stage to help generate as much money as possible for the charity. The generosity of the Bees Fans meant that on the night, along with the Silent Auction of many signed photos and shirts, around £30,000 was raised for the Community Trust.